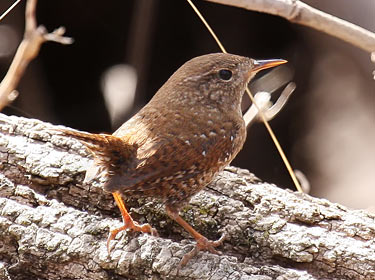 Song or calls:
Song is rapid series of trills, much higher than House Wren. Call is explosive “chimp-chimp.”

Description: Reddish-brown above; buffy below; barred above and below, with heavier barring on belly; indistinct light eye-line; and a stubby tail.

Habitat: Usually found among dense ravine thickets along streams, but also occurs in suburban gardens, parks, and other habitats.

Field Notes: Male often builds a dummy nest; a large, elaborate, domed structure with a side entrance. Thought to be a diversionary tactic against would-be nest predators.