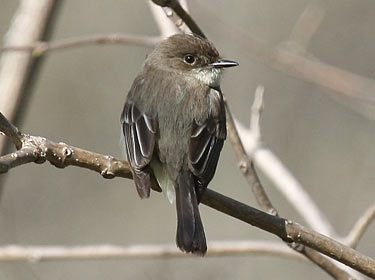 Description: Sexes similar. Brownish-gray above, being darkest on the head, wings, and tail. Underparts are mostly white with pale olive wash on sides and breast. Fall birds have a yellow wash below. All black bill, and lacks eye ring and distinct wing bars. Juveniles are browner above, with two buffy wing bars and a cinnamon rump.

Behavior: Has habit of pumping and spreading its tail.

Habitat: Normally found near water in woodlands or partially wooded areas including farmsteads, farm buildings, bridges, and other locations with artificial or natural ledges that are protected from above.

Fun Facts: An Eastern Phoebe was the first bird to be banded in North America, in 1804 by John James Audubon.