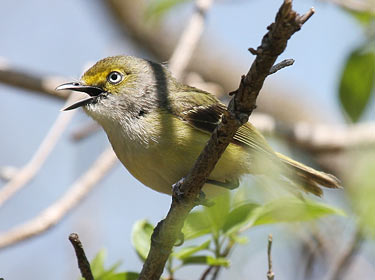 Song is loud, variable 5 to 7 note phrase usually beginning and ending with a sharp “chick.”

Habitat: Found among the dense understory of wooded bottomlands, and thickets near streams.

Where in Nebraska: Casual spring and fall migrant in the east, and a casual summer visitor, primarily in the southeast.

Fun Facts: White-eyed vireos do not bathe in shallow water but rather rub themselves against wet foliage.