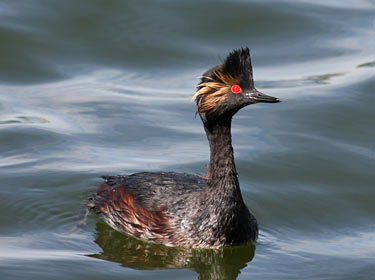 Song or calls:
In courtship utters a mellow “poo-eee-chk,” also has a rasping, shrill type of a call.

Where in Nebraska: In spring and fall a common regular migrant in the central and western portions of the state. A common breeder in the north and west. A rare casual summer visitor in the south. Best locations for viewing during the breeding season are Sandhills lakes with scattered emergent vegetation. A colonial breeder and nest in colonies of a few pairs to 100’s of pairs.

Field Notes: May ride high on the water or low like most grebes. Often nest in colonies.

Fun Facts: On cold, sunny mornings the Eared Grebe sunbathes by facing away from the sun and exposing its rump, exposing dark underlying skin to light.