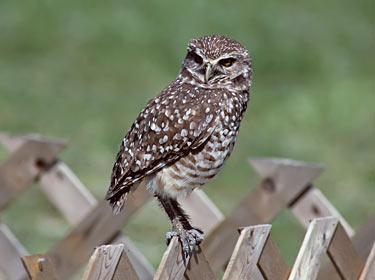 Description: Sexes similar. Long legs are distinctive; no ear tufts. Adult is generally earth brown with bold white spotting above and barring below; white eyebrows; white throat interrupted by a dark collar; short stubby tail. Juvenile lacks barring on the breast and is buffy below. Always stands upright whether perching or standing on the ground.

Habitat: A bird of open country, they are usually found on heavily grazed grasslands, especially those that support colonies of prairie dogs. May also occur on golf courses, road cuts, and airports. Normally nests in small colonies.

Where in Nebraska: Common to uncommon spring and fall migrant and summer resident in western and central parts of the state. Becoming rare further east. Not known to breed east of Lancaster County.

Field Notes: When disturbed at the nest, Burrowing Owls often give an alarm call that mimics the sound of a rattlesnake. Also bobs and bows when agitated.

Fun Facts: The Burrowing Owl nests on the ground and uses collected dung to line its nest. The dung ultimately attracts dung beetles which the owls then catch and eat.