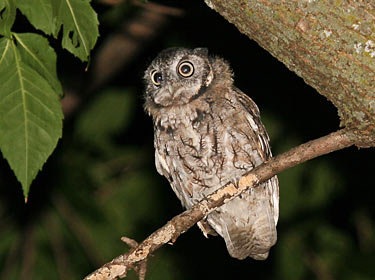 Song or calls:
Series of quavering whistles descending in pitch; and a long single trill, all on one pitch.

Habitat: Occurs in a variety of wooded habitats, including farmyards, orchards, and cities.

Where in Nebraska: Probably more common in cities than in heavy woodlands, where it is preyed upon by larger owls. Common permanent resident in wooded areas across the state. Rare or absent from treeless areas.