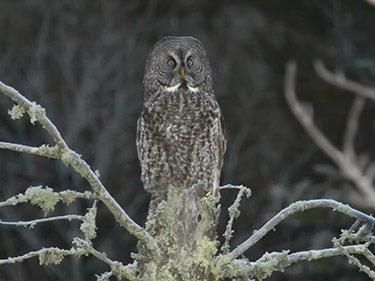 Song or calls:
Deep hooo note given at irregular intervals.

Habitat: Usually found in boreal forests and wooded bogs in the far north. Inhabits dense coniferous forests with alpine meadows in the southern fringe of its range.

Where in Nebraska: Accidental. Most recent sightings include one in Douglas County, 1948; Lincoln County, 1950; and Dixon County in 1978.

Fun Facts: The largest owl in North America. Great Gray Owls have been known to drive off predators as large as Black Bears when defending the nest.