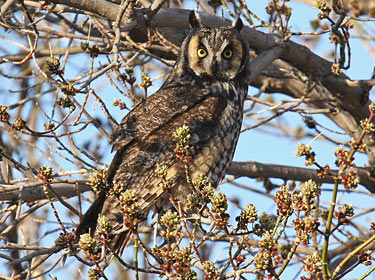 Song or calls:
In spring, “hoooo” hooted at intervals; and cat-like calls.

Where in Nebraska: Uncommon permanent resident in eastern Nebraska, becoming rarer westwardly. Will breed in the state. Some birds migrate from the north to Nebraska during the winter.

Field Notes: Can be found roosting during the day near the trunks of trees.

Fun Facts: The Long-eared Owl has been shown to be able to catch mice in complete darkness.