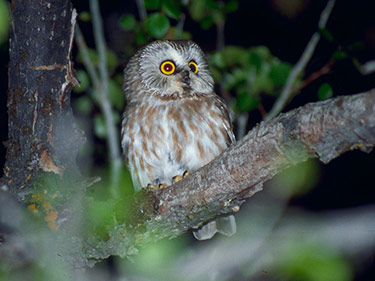 Song or calls:
Series of monotonous low whistles. Also a raspy call like the sound of a saw being sharpened.

Description: Sexes similar. Reddish-brown above, lightly streaked with white on forehead and crown; white below with broad rusty streaks; no ear tufts; yellow eyes; facial disks are reddish and lack a dark border; short tail; and a dark bill. Juveniles are tawny-rust overall.

Where in Nebraska: Uncommon to rare winter visitor in eastern Nebraska, and perhaps statewide. No definite breeding records, but a territorial male has been heard calling yearly at Fort Robinson.

Field Notes: Once found, it is tame and approachable during the day while roosting.

Fun Facts: The female Northern Saw-whet Owl does all the incubating and brooding of the eggs and owlets, while the male brings her all her food, she only leaves for breif periods to defecate and cough up a pellet.