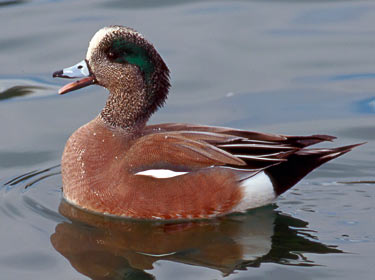 Habitat: Migration – sometimes found on large lakes or reservoirs. Breeding – marshes or lakes with food near or at the surface, especially those that have adjacent sedge meadows and partly wooded areas nearby.

Nebraska Seasons: Best time for viewing American Wigeons is in late May in south-central Nebraska.

Fun Facts: American Wigeons have a diet that consists of the most plant material than any other dabbling duck.

Additional Information: Commonly called a Baldpate due to the white crown.