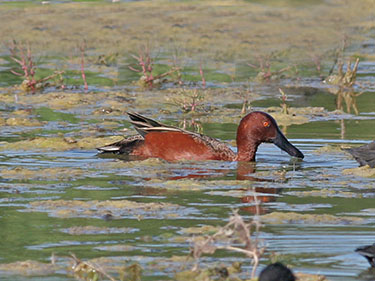 Field Notes: Field Notes: Known to interbreed with Blue-winged Teal. Breeds in alkali wetland areas such as Kiowa Springs and Facus Springs and on some western Sandhills lakes.

Fun Facts: When Cinnamon Teal females construct their nests they build them under dead vegetation and grasses so it is covered from all angles. As a result, to get to the nest the female uses tunnels to crawl toward the covered nest.