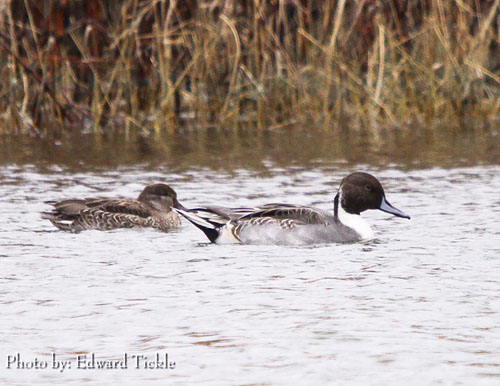 Description: A mallard-sized duck with a slim body, long neck, and a gray bill. The male has a distinctive long pointed black tail, gray body, and brown head with a white streak pointing up the side of the neck. The female is slim, a nondescript mottled brown, with shorter, somewhat pointed tail. Females are notably smaller than the males.

Behavior: like other “dabbling” ducks, it obtains its food by tipping up in shallow water. Engage in “pursuit” flights in which males aerially chase a female.

Habitat: During migration, most frequently in large expanses of shallow, open wetland habitats such as the Rainwater Basins where they are abundant. Occasionally, lakes and reservoirs. Pintails are less common during the breeding season, found primarily in Sandhills and pothole lakes and ponds surrounded by hay meadows or grassy hills.

Fun Facts: Northern Pintails are among the earliest nesters beginning soon after the ice begins to melt.