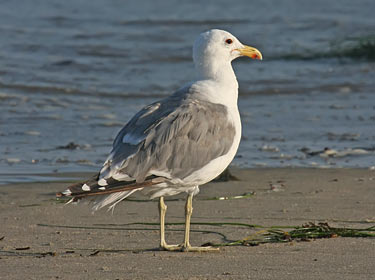 Description: Sexes similar. Breeding adult is medium gray above and white below; dark eyes; yellow bill with black and red spots; and greenish-yellow legs. Winter adult is similar to breeding adult but has  brown streaking on head than extends onto flanks. Third winter bird similar to adult but with more black on bill and some brown on the wings. Second winter bird has gray back; brown wings; white underparts with pale spotting; gray legs; and pale bill with dark tip. First winter bird is brown overall with pinkish legs. Juvenile is similar to first winter bird but has dark brown legs and a darker bill.

Habitat: Migrants can be found on lakes, large marshes, and other similar bodies of water.

Where in Nebraska: Rare migrant or vagrant across most of the state, but regular to uncommon in northwestern Nebraska.

Field Notes: The species breeds in North and South Dakota, but apparently not in Nebraska.

Fun Facts: Helped rid the plague of grasshoppers from Morman settlers’ crops in 1848, which lead the gull to become the state bird of Utah.