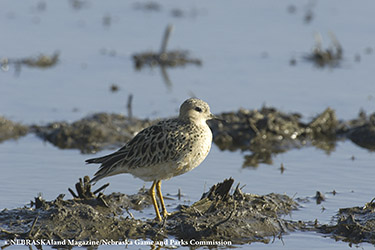 Song or calls:
Usually silent, calls are quiet and heard at close distances.

Description: Sexes similar.
The Buff-breasted Sandpiper is a medium-sized bird. It has a short, pointed, black bill, rounded head and it has long yellow legs. It is considered buffy all over and the wings have white undersides. There are small black spots on the crown and back.

Behavior: During their spring migration stopover, Buff-breasted Sandpipers spend most of their time foraging in corn and soybean fields, sometimes following behind farm equipment as fields are being worked and planted.  Wetlands are visited for bathing and drinking.

Habitiat: Buff-breasted Sandpiper is most frequently found in corn and soybean fields, but also in grazed pastures and Rainwater Basin wetlands.

Nebraska Seasons: Rare spring and fall migrant across the state.

Buff-breasted Sandpipers can travel 18,000 miles in a single year between their wintering grounds in southeastern South America and breeding grounds in the North American Arctic.