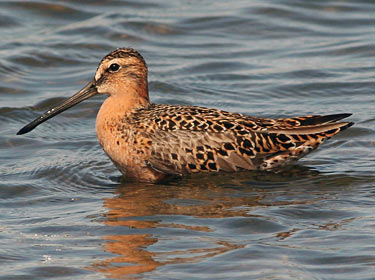 Description: Sexes similar. Long snipe-like black bill and relatively short yellow-green legs. Black, buff, and rufous mottled above; rusty orange-red below with dark spotting. Some birds will have a white belly and rump with black barring. Black and white checkered tail. Winter birds are gray above and white below with light barring on flanks; distinct white eyebrow stripe. Juvenile is similar to winter adult, but buffy instead of gray, with buffy wash on breast.

Behavior: Feeds with head down, and distinctive sewing machine-like action.

Where in Nebraska: Occasional to rare migrant in eastern part of state, becoming rarer in western Nebraska. Most of recent sightings are from Lancaster County.

Fun Facts: Both parents take part in incubation of the eggs, but once they hatch the male takes care of the young.