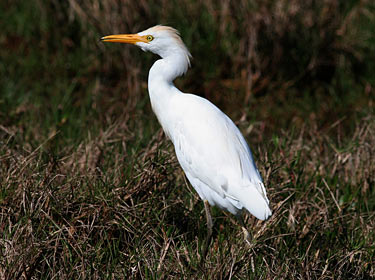 Song or calls:
Usually silent but known to utter croaking sounds during the nesting season.

Where in Nebraska: Uncommon to locally common spring and fall migrant mostly in the eastern and central portions of the state. Breeding

Field Notes: Introduced from Old World. Usually found near cattle and forage largely on grasshoppers and other insects rather than on fish like most herons.

Fun Facts: Cattle Egrets are attracted to smoke where fire dispels insects and follow cattle and tractors to eat the insects they stir up.