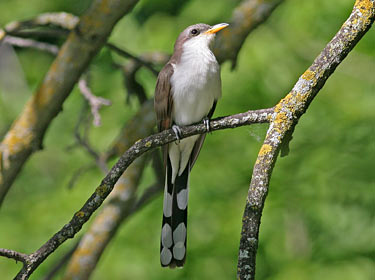 Description: Sexes similar. Long, slender bird. Rather long, curved bill is black with a yellow lower mandible. Olive-brown above, white below. Light eye ring. In flight, rufous primaries are distinctive. Undertail feathers are black with large white spots on the tips. Juvenile is similar, but has a paler undertail pattern, and the bill may show little or no yellow.

Habitat: Migrants and breeders can be found in moderately dense thickets preferably near water, second-growth woodlands, abandoned farmsteads that are overgrown with shrubs and bushes, and brushy orchards. These birds tend to avoid extremely dense woods.

Where in Nebraska: Common spring and fall migrant and summer resident across the state. More common in the east than in western Nebraska. Rare in the panhandle. Also a regular breeder.Field Notes: Unlike their Old World relatives, North American Cuckoos are only occasionally brood-parasitic.

Fun Facts: Sometimes called the “rain crow” referring to it’s habit of singing on hot days. Has zygodactylous feet (two toes before and two behind).