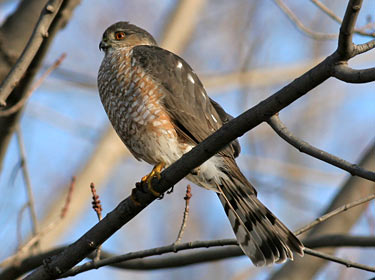 Song or calls:
A high “ke-ke-ke-ke.” Often heard near nest.

Description: Sexes similar. Slate blue above, white with rust-colored cross-barring below. Told from similar Cooper’s Hawk by a square rather than rounded tail. Tail is often notched. Crown and back are not strongly contrasting. Immatures are brown above, white with brown streaking below. Females are larger.

Habitat: Found in areas of fairly dense forest. Prefers woods with a mix of coniferous trees.

Where in Nebraska: Uncommon to occasional winter visitor and spring migrant across the state. Thought to nest in the forests along the Missouri River valley.

Fun Facts: Sharp-shinned Hawks parents will fling and kick out prey to whichever of their young reached them first while in flight.