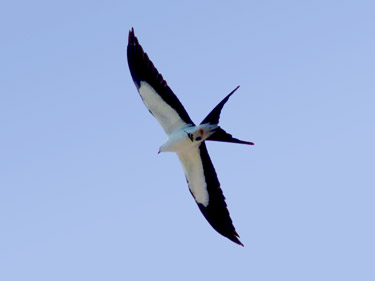 Description: Sexes similar. Seen in flight this bird has a white body and black primaries and tail. Tail is deeply forked. When perched, has black back and white head. Again, forked tail is distinctive.

Habitat: Found in open woodlands and wetlands. Relies on tall trees to nest in, surrounded by open areas to hunt for small prey.

Where in Nebraska: Extirpated from Nebraska. Used to breed in the eastern part of the state, disappearing after 1900. Today is found in the southeastern United States.