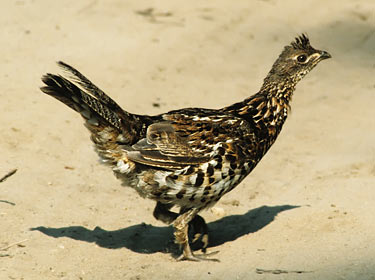 Description: Mottled brown, gray-brown cross-barring below. Slight crest on head. Tail is fan-shaped with dark band near tip. Male has black ruff feathers that can be erected. Female plainer with smaller ruff.

Where in Nebraska: Extirpated from Nebraska. Was a permanent resident of Missouri Valley forests in beginning of 1900’s. No sighting records since 1973.

Status: Unsuccessful releases of Ruffed Grouse were made during 1968 in Nemaha county, Nebraska.

Fun Facts: Ruffed Grouse grow projections on their toes before winter, possibly to help them walk on top of snow much like snowshoes.