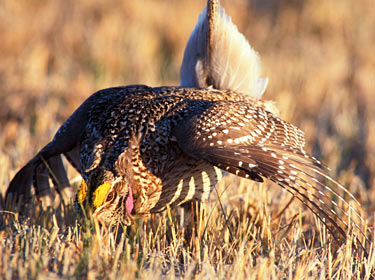 Description: Mottled brown. Slightly lighter underneath with v-shaped markings. Central tail feathers are elongated, and outer tail feathers are white. Tail of male is longer than female’s. Purple air sacs are visible on a displaying male.

Habitat: Open grasslands, preferably with few or no trees.

Where in Nebraska: Locally common permanent resident and breeder, primarily north of the Platte River in the western part of the state.

Status: Range was once more widespread, probably occuring over the entire state.

Fun Facts: Sharp-tailed Grouse males dance on leks to attract females and females may visit a more than one lek and up to ten times and then go off elsewhere to lay her eggs.