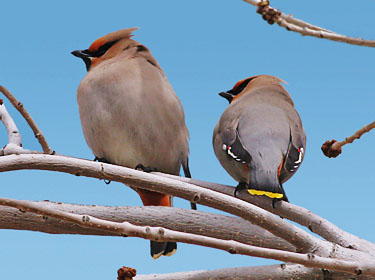 Song or calls:
Rasping “sr-r-r-r-r-ee.”  Low in pitch, and with discernible individual notes.

Where in Nebraska: Occasional to rare winter visitor, irregular in geographic and yearly occurence.

Field Notes: Irruptive in winter. Erratic southward movements in winter thought to be caused by food shortages in the north.

Fun Facts: Bohemian Waxwings have no true song and do not defend territories, perhaps because the fruits they eat are so abundant and available for such a short period of time.