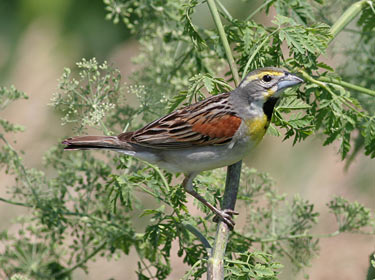 Habitat: Grasslands with a combination of tall grasses, forbs, and shrubs. Also found in various croplands, especially alfalfa and clover.

Where in Nebraska: Common to abundant spring and fall migrant and summer resident across the state, except in the Panhandle where it is uncommon to rare.

Fun Facts: During migration, Dickcissels’ flocks get larger and larger until they reach their wintering grounds with over a million birds.