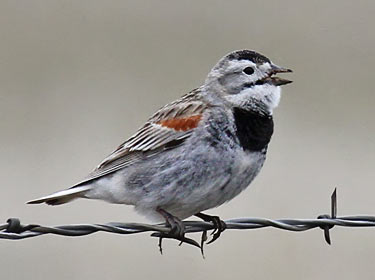 Song or calls:
Song, heard only on breeding grounds, is series of rapid warbles and twitterings.

Status: Population has declined with destruction of prairie habitat.

Fun Facts: McCown’s Longspur males display for females with aerial displays, where he flies upwards and sings while floating down, only to repeat the process.