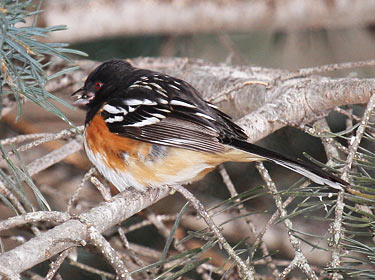 Where in Nebraska: Common spring and fall migrant and summer resident in western Nebraska. Occurs east along Platte for uncertain distance. Replaced by Eastern Towhee in east and southeast Nebraska.

Fun Facts: During the breeding season Spotted Towhees spend 70% to 90% of their mornings singing to attract a mate.