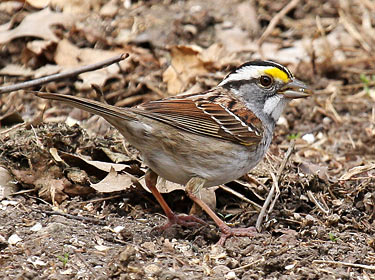 Habitat: Migrants are found in woodland edges, thickets, weedy fields, and sheltered areas near water. Occasionally seen at feeding stations during the winter.

Where in Nebraska: Common spring and fall migrant in eastern Nebraska, becoming uncommon to rare in the west. Locally common winter visitor.

Field Notes: Usually found on the ground. Mixes with other sparrow during fall and winter.

Fun Facts: White-throated Sparrows nest on or near the ground, but if the nest is predated the parents will attempt a second nest up to 15 feet off the ground in a tree.