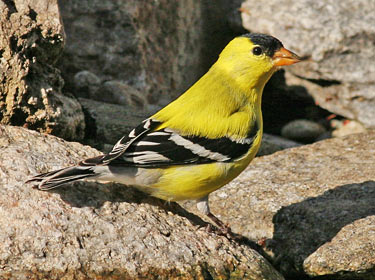 Habitat: During the fall and winter birds are often found foraging in fields of tall weeds.  Breeding usually occurs in rather open grassy areas, farmsteads, swamps, and other areas where thistles and cattails are abundant.

Where in Nebraska: Common permanent resident across the state. Winter populations vary from year to year.

Fun Facts:  Sometimes known as “Wild Canary”.  American Goldfinches are the only bird in the Finch family that molts twice a year including the breeding season.