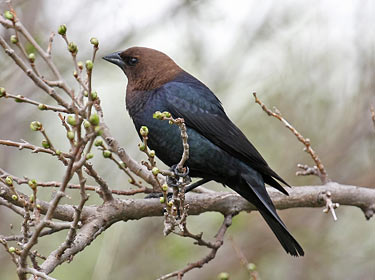 Song is a variety of thin whistles, high squeaking, and gurgling notes.

Description: Small finch-like bill; dark eyes. Male has entirely black body with a metallic green-black sheen; and a dull coffee-brown head. Female is plain gray-brown overall. Juvenile is similar to female but has light streaking on breast and “scaled” upperparts.

Behavior: Migrants are often seen in fields among cattle.

Habitat: Breeding birds are found in woodland edges, brushy thickets, and other areas with a combination of low and scattered trees and grasslands.

Where in Nebraska: Common to abundant spring and fall migrant and summer resident across the state.

Field Notes: Brown-headed Cowbirds are brood parasites, and upon choosing a nest the female removes one egg from the host’s nest and deposits one of her own in its place. The young cowbird is left to be raised by the host parent.

Fun Facts: Cowbirds were named for their close association with grazing livestock (formerly bison) which flush up insects for the birds to eat.