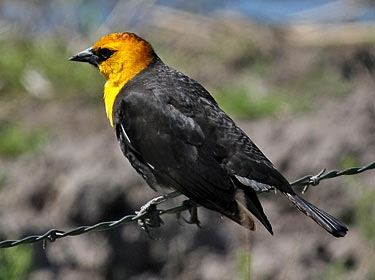 Habitat: Deep marshes, marshy areas of ponds and lakes, and other habitats with an abundance of cattails and bulrushes. Often found nesting near Red-winged Blackbirds, mostly using the deeper portions of the marsh.
Where in Nebraska: Common to abundant spring and fall migrant across the state. Locally common summer resident in permanent marshes.

Fun Facts: Male Yellow-headed Blackbirds will defend a small nesting territory and attract up to eight females to nest in the reeds. He will provide food for nestlings in the first nest established but the other females have to provide food all by themselves.