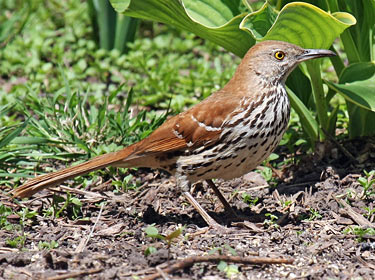 
Long series of varied melodious phrases, each phrase usually given only 2 or 3 times. Seldom imitates the songs or calls of other birds.

Where in Nebraska: Common spring and fall migrant and summer resident across the state, becoming rarer in extreme western Nebraska.

Fun Facts: Brown Thrashers are aggressive defenders of their nests and have been known to strike dogs and even people, hard enough to draw blood.