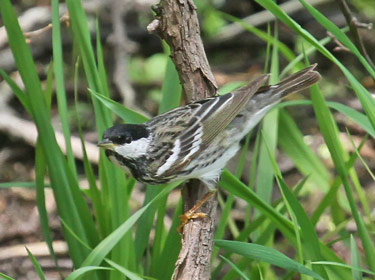 Habitat: Migrants found in tall deciduous trees such as cottonwoods, and in streamside forests.

Fun Facts: Part of the fall migratory route of the Blackpoll Warbler is over the Atlantic Ocean from the northeastern United States to south America. This route averages 3,000 km (1,864 mi) over water, requiring a potentially nonstop flight of up to 88 hours. To accomplish this flight, the Blackpoll Warbler nearly doubles its body mass and will burn fat as fuel. If they were burning gasoline instead of fat, they’d be getting about 720,000 miles to the gallon. During this arduous trek, they will beat their wings three to four million times; they will have no rest, no food, no water.