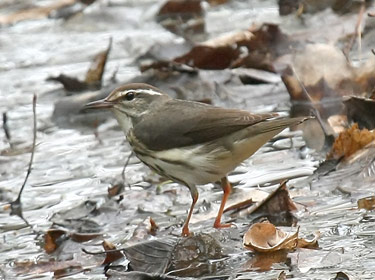 Song or calls:
Song begins with 3 or 4 shrill, slurred notes followed by a brief, rapid jumble.

Behavior: Forages on the ground; walks rather than hops, and bobs its tail constantly but usually slowly.

Where in Nebraska: Rare to uncommon spring and fall migrant in southeastern Nebraska, becoming rarer to the north and west. No evidence of current breeding in the state.

Fun Facts: The Louisiana Waterthrush wags the entire back half of its body and tail up and down while walking.