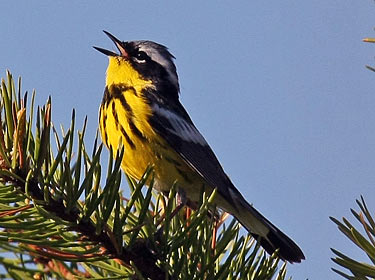 Habitat: Can be found in a wide array of deciduous and coniferous habitats, but often prefer rather thick woods. Usually forage 20-30 feet above the ground.

Where in Nebraska:Uncommon spring and fall migrant in eastern Nebraska, becoming rarer westwardly.

Fun Facts: Originally referred to by Alexander Wilson as “black and yellow warbler”

Additional Information: Received its common name after it was discovered on a magnolia tree in Mississippi during spring migration.