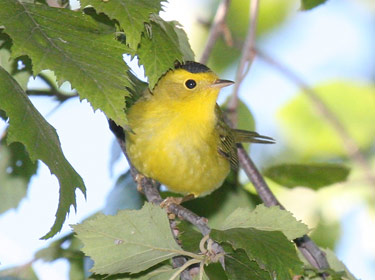 Song is rapid series of light “chips,” accelerating in tempo and increasing in intensity.

Description: Greenish-olive above; yellow below; long tail is all dark above and below, and often cocked. Male has yellow face and small black cap. Female is similar, but either has blackish or absent cap.

Behavior: Forages on the outside of leafy branches, often catching flying insects on the wing.

Habitat: Migrants are found in rank stands of weeds, and low shrubby vegetation, often near streams.

Where in Nebraska: Common spring and fall migrant in eastern Nebraska, becoming uncommon in the west.

Fun Facts: Wilson’s Warblers have little fear of humans and are easy to spot because they perch on the ends of leafy branches to catch insects while flying.