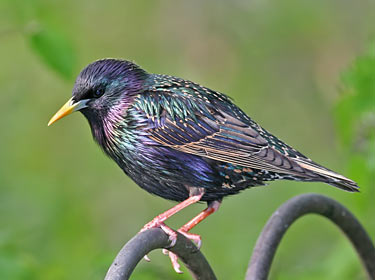 Grating “veer.” Song is without musical quality, interspersed with whistles and mimicked notes.

Habitat: Found almost everywhere throughout the year. Especially associated with human habitations such as cities, suburbs, farms, and with mature woodlands having woodpecker holes or other tree cavities for nest sites.

Where in Nebraska: Common to abundant permanent resident across the state. Migrants from the north increase the fall and winter populations.

Fun Facts: European Starlings numbering 200 millions from Alaska to Mexico are considered pests and are not native. They all descend from 100 individuals that were released in New York’s Central Park in the 1890s by a group that wanted to establish every bird that William Shakespeare ever mentioned.