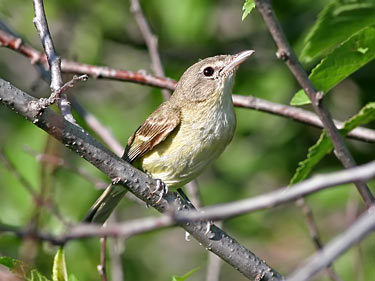 Habitat: Found in thickets near streams or rivers, in second-growth scrub, forest edges, and brush patches.

Where in Nebraska: Common spring and fall migrant and summer resident in eastern Nebraska. Becomes rarer westwardly. Breeds locally to the west along major river valleys.

Status: Population is seriously declining in southern California, largely due to brood parasitism by cowbirds.

Fun Facts: Bell’s Vireos have not been observed drinking water, indicating they may get all the water they need from their food.