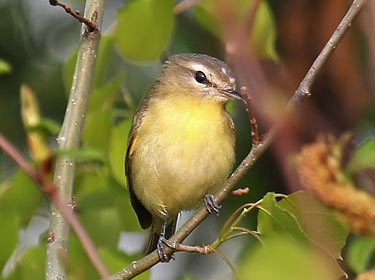 Song or calls:
Song similar to Red-eyed Vireo’s, but generally slower, thinner, and higher in pitch.

Where in Nebraska: Uncommon spring and fall migrant in east, occuring west to at least Garden County. No breeding records for Nebraska.

Status: The Philadelphia Vireo is not only uncommon in Nebraska, but throughout its range.