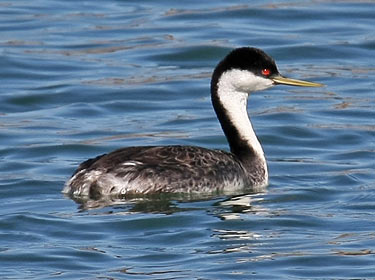 Habitat: Rivers, lakes and reservoirs while on migration. Breeding occurs on ponds and lakes with large expanses of open water, and on some large marshes.

Where in Nebraska: A common and locally abundant spring and fall migrant in the western portion of the state and less common in the east. A locally common regular breeder in northern and western area.

Field Notes: Nesting is colonial. Large numbers of Western Grebe’s can be seen on Lake McConaughy in late April-early May and late September-early October.

Fun Facts: Once a Western Grebe’s eggs hatch, usually a pair, both parents carry the young on their backs, while feeding them, and do not return to the nest.