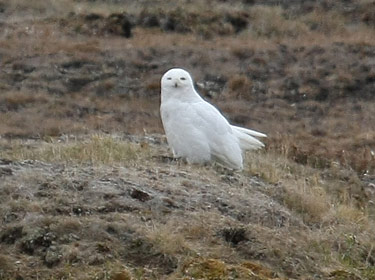 Where in Nebraska: Often seen perching on fence posts or other elevated sites. Occasional winter visitor. Usually not seen every winter, but can occur anywhere in the state.

Field Notes: An irruptive species, they depend heavily upon lemmings for food. As the lemming population flucuates and food supplies get low, Snowy Owls then migrate south in large numbers.

Fun Facts: They have feathers on their feet for extra warmth during the winter.